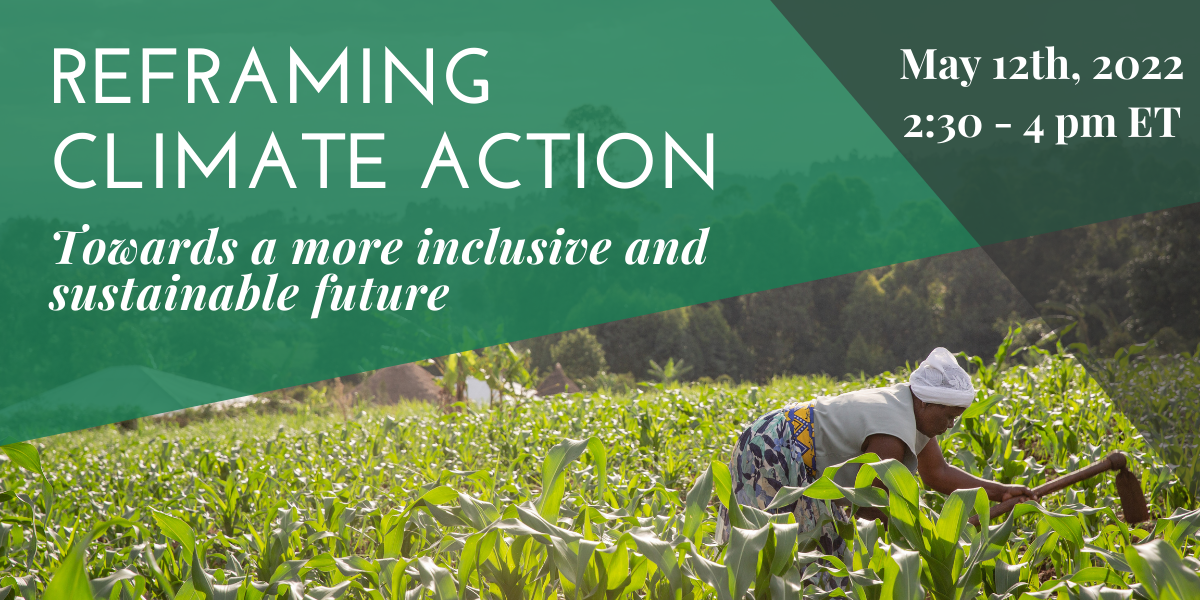 As warning signs of climate breakdown grow ever more present in our daily lives, James Irungu Mwangi urges the global community to think of the climate crisis as a catalyst for positive change – with Africa in the lead.

Mwangi, executive director of the Dalberg Group and founder of the Climate Action Platform for Africa, made this case on May 12, 2022, as part of Reframing Climate Action, the first event in an AKFC speaker series on climate change resilience and adaptation.

AKFC welcomed an audience to the Delegation of the Ismaili Imamat in Ottawa, to join Mwangi in a discussion on shifting the climate narrative in Africa from vulnerability to opportunity. Moderated by Sue Szabo, director general of Innovative and Climate Finance for Global Affairs Canada, the conversation explored Africa’s role in accelerating global climate action by pursuing inclusive, sustainable climate initiatives. Mwangi addressed the opportunity for Africa to transition to an inclusive, green economy that would open opportunities across society in sectors such as renewable energy, green production, carbon removal, and regenerative agriculture.

Recasting Africa as a climate leader

As climate-vulnerable communities like smallholder farmers in sub-Saharan Africa bear the increasingly harsh impacts of climate change, Mwangi urges Africans and the global community to use the climate crisis as a catalyst for positive change.

Current conversations tend to focus on “the very legitimate argument that says Africa should be compensated for the loss and damage it is suffering and should be buffered with preparation, through adaptation and resilience-building, for the damage to come,” he says.

“That needs to happen. That’s not what I’m here to argue,” he adds.

If we are to meet the global challenge of limiting global warming to 1.5 degrees Celsius, compared to pre-industrial levels, Mwangi argues now is the time to invest in Africa’s potential for climate action and leadership. Advancing Africa as a climate leader in global efforts to reach net-zero emissions could also lead to livelihood creation and economic transformation.

Rather than following a path of emissions-intensive development that has failed to lift most Africans out of poverty or strengthen their climate resilience, Mwangi proposes investing in green production and consumption methods to help leapfrog Africa into the green economy.

“It’s faster to build renewables as a general rule,” he says, “and the economics of it make a lot of sense. The only problem is it costs about 50 percent more upfront and that is a problem of global capital allocation.”

Prioritizing financing for renewables over fossil fuels is a matter of understanding how valuable making this pivot is not just for Africans, but also for the global community, Mwangi argues.

Expanding production and access to renewable energy in turn opens the door for African nations to attract companies seeking to fulfill commitments related to green manufacturing. According to Mwangi, Africa’s competitive advantage would be providing a production environment that is green from the start. Establishing a climate-smart case for companies to shift manufacturing processes over from carbon-intensive regions could help to create dignified jobs in Africa, diversify global supply, and set “a race to the top rather than a race to the bottom.”

The urgency of the climate crisis requires deep and rapid emissions reductions. Grounded in historically low emissions, Africa has the potential to move beyond net-zero to net-negative emissions by advancing carbon removals through both nature-based and technical solutions, says Mwangi. Effectively, this would see Africa removing more carbon emissions from the atmosphere than it contributes.

Mwangi argues Africa is an ideal location for large-scale carbon removal as it makes more sense to install carbon removal technologies in countries that have a massive available supply of renewable energy that could be used to power carbon removal plants rather than fossil fuels.

“You’re looking for places in the world with massive renewable energy capacity and no existing emissions to abate. Sounds like my home continent,” says Mwangi.

Using carbon credits as additional income to incentivize climate-smart practices could also open new opportunities to support dignified livelihoods. For example, with support from NGOs and agricultural unions to participate in carbon markets, smallholder farmers could benefit from undertaking regenerative agriculture practices that increase the quantity of carbon stored in the soil, improve crop yields by restoring soil fertility, and reduce reliance on synthetic inputs.

“This is not about charity. This is some of the cheapest carbon removals you can buy anywhere in the world,” said Mwangi.

For this vision to become a reality, he highlighted the need to mobilize political support, demonstrate the potential climate impact of investments through data, and—critically— attract capital.

In concluding his remarks, Mwangi shared his dream of two newspaper headlines. In Kenya’s Daily Nation, he envisions a front-page story showing a happy woman saying, “I got 5,000 shillings from just boosting my soil carbon,” prompting every farmer to ask how they too might get paid for carbon. He envisions a different headline for a paper like the Financial Times: “African farmers could remove 300-500 million tonnes of carbon from the air every year for less than $50 a tonne.”

Given that Canada produced 672 million tonnes of CO2 in 2020, the efforts of smallholders alone could offset a significant portion of Canada’s annual emissions while delivering additional benefits to African smallholders who have been struggling to cope with the impacts of climate change.

As noted by Szabo, James “laid out a compelling vision; it’s not just a vision for Africa, it’s a vision for the planet.”

Emphasizing the need for action, Szabo closed the session by stating, “Clearly what you’ve showed us is there’s a lot of opportunity and there are no more good excuses not to go and seek out those opportunities.”

Reframing Climate Action was the first event in a speaker series on climate change resilience and adaptation.

The series aims to bring together practitioners, advocates, and others who share an interest in exploring and discussing how we may use the climate crisis as a catalyst for great leaps in addressing the complex challenges involved in confronting climate change in a manner that advances sustainable development, well-being, and resilient livelihoods for all.