Just over two years ago, the World Health Organization declared COVID-19 a pandemic. The months that followed laid bare deep vulnerabilities and inequalities across sectors and changed life as we knew it around the world. 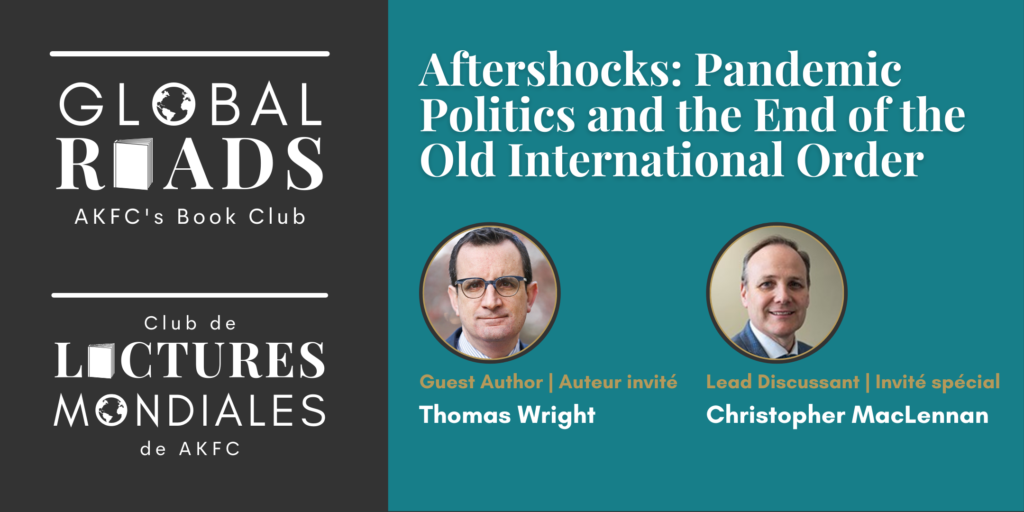 Each month, Global Reads will examine a literary work focused on international affairs, policy, or practice, and engage in meaningful dialogue on the themes presented within the book of the month.

“As practitioners, an opportunity to take a step back and have a conversation about a work that has just come out is a rarity,” said MacLennan. While we often discuss issues of the day with family and friends around the kitchen table, we don’t often have a similarly structured space to discuss and dialogue with colleagues, he added.

In Aftershocks, authors Wright and Colin Kahl tell the story of how the worst pandemic in a century is pushing the old international order to its limits, and how the reverberations from COVID-19 will continue to be felt for years to come.

Wright said that he and his co-author were drawn to the idea of writing a book on the implications of the pandemic for international order. “But if we were to write it, we wouldn’t just want it to be speculative. What we’d want to try to do is to describe analytically, write an analytical narrative in real-time, of how this is playing out geopolitically,” said Wright.

“It struck us that in contrast to 2008, when you had a financial crisis and the world came together by creating the G20 at the leaders’ level and by having a really extraordinary cooperative response, that on this occasion the world seemed very fundamentally broken,” he added.

During the event, MacLennan and Wright engaged in a broad range of topics, from the challenge of producing a reliable narrative about a pandemic as it happens, to the visceral impulse of countries, particularly in the early days, to focus on national strategies of managing COVID-19 while global cooperation seemingly ground to a halt.

“Canada is partly an exception [to isolationist thinking] because it is one of those countries that would very much think of that multilateral system and is large enough and powerful enough to be in the G7 but also has that more multilateral view. But that’s just a really rare phenomenon in 2020,” said Wright.

They also fielded audience questions on the challenges and promise of international cooperation and development and creating space for developing countries to forge more equitable global relationships.

“One of the impacts of globalization is that almost the entire globe is affected when crises happen. We’ve held out the possibility of a pandemic as one of the core reasons why Canada, as a developed country, has a self-interest in working with developing countries to improve their health systems, for purposes of surveillance, for purposes of infection control, and for treating their citizens. That it can have a much broader impact on global health than just the country that you’re working in, ” said MacLennan.

AKFC CEO Khalil Z. Shariff closed the event by thanking the speakers and guests for joining the inaugural Global Reads.

“It is perhaps the most substantive gratitude for me to leave you with a question about the actual conversation that we’ve had,” said Shariff.

“I wonder if in this next phase of global development… maybe this is an era when we will rely on more those non-governmental forces that might be able to connect in a different cadence and with a different impulse across borders,” said Shariff. “What does that mean for us?”

Missed the event? You can watch the recording here:

Mr. MacLennan holds a Ph.D. from Western University specializing in constitutional development and international human rights. From 2012 to 2013, he was a Fulbright Visiting Scholar at Stanford University’s Center on Democracy, Development, and the Rule of Law. Mr. MacLennan has written numerous publications, including Toward the Charter: Canadians and the Demand for a National Bill of Rights, 1929–1960.

Thomas Wright was the director of the Center on the United States and Europe and a senior fellow in the Project on International Order and Strategy at the Brookings Institution. He is also a contributing writer for The Atlantic and a nonresident fellow at the Lowy Institute for International Policy. He is the author, with Colin Kahl, of Aftershocks: Pandemic Politics and the End of the Old International Order, which was published by St Martin’s Press in 2021. His first book, All Measures Short of War: The Contest For the 21st Century and the Future of American Power, was published by Yale University Press in 2017. Wright also works on U.S. foreign policy, great power competition, the European Union, Brexit, and economic interdependence.