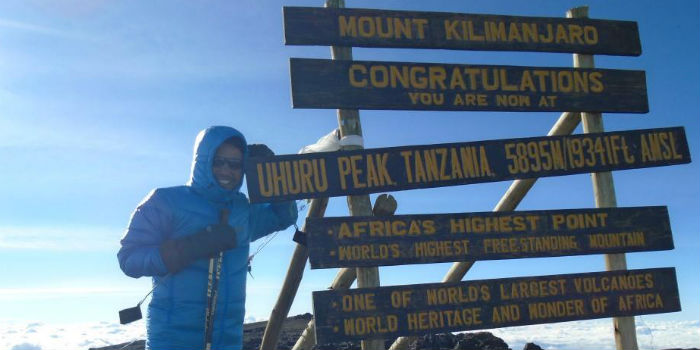 November 8, 2016– Climbing Mt. Kilimanjaro had long been a dream of Girish Agrawal. “I always wanted to climb Kilimanjaro, but I never got to it,” said the Calgary-area businessman. When he started to plan to make that dream a reality, a new dream emerged. If he was going to make all this effort to reach the summit of Mt. Kilimanjaro, he decided to expand his goal, by raising funds for an important cause. “I realized I’m going to take this big risk because I have not done any of these kinds of things in my life,” said Girish, adding that he wanted to bring “a little bit more value” to his considerable efforts.

When he heard about the Aga Khan Development Network’s sanitation efforts in India, his choice became clear. “I realized how we could help our children finish their education, girls especially,” he said. Women and girls are often the most negatively impacted by the lack of adequate toilet facilities, and many girls end up dropping out of high school because of it. “I was raised in India, and this gave me a way to give back,” said Girish.

We often take indoor plumbing and toilet facilities for granted, but in India, a lack of access to safe sanitation has very real consequences. According to recent estimates, about 1.5 million children under five die each year from water-borne diseases, primarily diarrhoea. The country also loses over an estimated 200 million workdays annually due to these diseases.

That has changed in the village of Karan, in the Indian state of Gujarat. Through an AKFC -supported initiative, each home in the village now has access to safe water, a toilet facility, and underground sewerage. Hand in hand with the construction of sanitation facilities has been information about hygiene practices, from washing hands before meals to the use of long-armed ladles for drinking water pots.

These efforts in Karan are part of the AKDN’s integrated community health programs, which currently reach over 240,000 people in four states in western and central India. In all cases, communities lead programs that work to ensure access to quality, affordable community health services, with an emphasis on child survival and maternal health. Water supply and sanitation programs are coordinated with other environmental health activities, with a special focus on the needs of women and girls.

Support from thousands of Canadians like Girish have made efforts like these possible . Despite having had no fundraising experience, Girish raised over $150,000 for toilets and sewerage facilities in places like Karan.

The experience of raising money and climbing Mt. Kilimanjaro was life transforming for Girish. “[While on the mountain] I realized millions of things have to go right before somebody could even be alive. So, once you are alive, how then are you able to contribute?” he mused.

“It’ll be very hard for me to let any of my future here go without making the effort to do better for others,” he said.