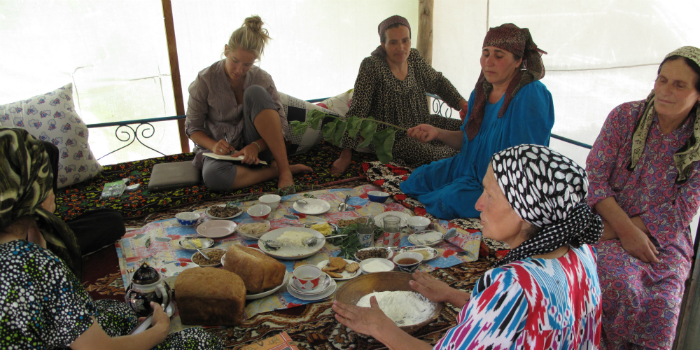 October 12, 2016 – The Pamir Mountains, at the junction of the Himalayas with the Tian Shan, Karakoram, Kunlun, and Hindu Kush ranges are among the highest mountains in the world. To the uninitiated, the landscape can seem wild, barren, even hostile. But the region is actually a centre of origin for many crops that we see on dinner tables around the world today, such as rye, and certain varieties of apples, walnuts, and apricots. To the Pamiris however, this is simply home.

“Does this land know that we, people from the Pamirs, feel lost when we are without it? Is it because it knows this, that it seems always to make us come back? There is something here in the land that calls to us.” –Excerpt from With Our Own Hands

With Our Own Hands tells, for the first time, the cultural and agricultural history of the Afghan and Tajik Pamirs, one of the world’s least known and most isolated civilizations. Through the lens of local recipes, one hundred in total, and accompanied by the work of three award-winning photographers, it describes Pamiri food and its origins, people’s daily lives, their struggles and celebrations. In a context where poverty, conflict and political upheaval have made it difficult for people to express and define their identity, food provides a powerful sense of connection and belonging.

The book uses food as a lens to discover the cultural and biological history of the Pamir Mountains. The voluminous book is full of beautiful photographs of the region, to match the incredibly rich and diverse stories and culture of the Pamiri people.

With Our Own Hands is the culmination of the joint efforts of Dutch ethno-botanist Frederik Van Oudenhoven and PhD student and AKFC Youth Fellow Jamila Haider. Having met over a bowl of apricot soup during a workshop on agricultural biodiversity in the Pamirs, Frederik and Jamila were fascinated by the unique culture and food in the region. In 2011, the pair trekked the mountains to visit communities, asking people to cook something for them while collecting their recipes and stories.

Lengthy years of editing, designing, and translating the cookbook soon followed. For Frederik and Jamila, it was important that the book was accessible to the communities they had interviewed. They relied heavily on a local translator, a gifted poet, who wrote everything out by hand and had it typed by his students. The translation alone took over two years to complete.

“The book was written by and for Pamiri people,” said Jamila. It was finally published in Tajik, Dari, and English in 2015. The pair travelled back to the Pamirs and distributed 1,700 copies to every single community in the region.

Anyone interested in travel to this remote and isolated part of the world; or in food, culture, and the interrelationship between humans and landscapes would be interested in this book. With Our Own Hands was honoured as the Best Cookbook of the Year in 2016 by the Gourmand World Cookbook Award.