An interview with Onno Ruhl, General Manager of the Aga Khan Agency for Habitat

Onno Ruhl is the first General Manager of the Aga Khan Agency for Habitat (AKAH), created in 2016 to address the increasing threat posed by natural disasters and climate change. The agency works to ensure that communities are as safe as possible from the effects of natural disasters, that residents who do live in high-risk areas are able to cope with disasters in terms of preparedness and response, and that these settings provide access to social and financial services that lead to greater opportunity and a better quality of life.

Aga Khan Foundation Canada sat down with Onno during a visit to Canada to learn more.

Tell us about the work of AKAH. How did the agency come about?

AKAH is a new agency, but it isn’t new in the sense that it’s actually built on the legacy of a number of organizations that existed in the Aga Khan Development Network (AKDN). His Highness [the Aga Khan] realized that the intensity, in terms of frequency but also severity, of natural disasters all over the world got much worse. From that perspective, the solutions that worked to keep community safe in the last 20 years were unlikely to be good enough to keep the community safe 20 years, let alone 50 years, going forward.

What role do communities play in “planning for opportunity”?

Mobilizing communities started as a complement to mapping the physical risk in each of the communities where we work. That means that you send geologists and community mobilizers – because the community needs to allow you to do it – to literally go to a village and map the physical assets. So we have, as intellectual capital in our agency, the hazard vulnerability and risk assessments of 2,207 communities in India, Pakistan, Tajikistan, and Afghanistan.

Now, the combination of the survey and geology skills that we have, and the ability to work with the GIS [Geographic Information System] databases, is the same skill set that one would need to use the same databases not just for mapping risk, but for planning. So the logic is to build on the existing skills and build a methodology to allow us to work with these communities to plan.

It is well known that there’s two ice caps that are melting in the world: the North and the South Pole. What not so many people realize is that the third largest concentration of ice in the world, sometimes referred to as the “Third Pole,” is the Himalayan mountain range. And it’s a very different geography. There are no polar bears there. There are people living there, and they are as threatened as the polar bears. And when you go downstream, that “Third Pole” is actually the watershed that feeds one-and-a-half billion people in Asia, stretching all the way from Afghanistan to Vietnam, and into China, Central Asia, India, Pakistan, Bangladesh. So there are really compelling reasons to work in this area, because it’s one of the most important frontlines of climate change adaptation.

People love to talk about climate change mitigation. But people often forget that about 200 million people in the world today are already at risk in their habitat because of climate change that has already happened. Therefore, there are really compelling reasons to work in these geographies. You can’t just move 200 million people, there’s no way that would work. We have to work with these people to adapt to where they are.

The second reason why we work there is because these are the areas where the AKDN historically has engaged for a very long time. And this is therefore where we are rooted in these communities in a way that allows us to do things that, I think I can say with some confidence, other development networks wouldn’t be able to do.

Mountains are often seen as marginal. And it is often thought that it’s just a hopeless cause to allow mountain people to thrive because it’s just such a difficult environment. At the AKDN, we don’t accept that. Switzerland, over 200 years, managed to turn the mountains into an incredible competitive advantage and become one of the very richest countries in the world. Other mountain communities, over the long term, should be able to thrive and maintain their heritage and benefit from the mountains and not depopulate these beautiful areas.

What are the other major areas of work for the agency?

I think it’s important to talk about AKAH’s bread and butter, which is water supply and sanitation.

Over the last 18 years the AKDN has provided piped water into the homes of half a million households. Ten years in, we were asked to evaluate what had been built. Ninety-six percent of the schemes were still operating according to World Health Organization standard.

The reason so many of them kept working is the same reason they worked in the first place: the engineering is really good, and there was a lot of attention to having the right water source to get the quality we need. But the reason it keeps working is because the community helped build it, and we trained members of the community to do the regular maintenance. Not repair after it breaks, but regular maintenance.

The first time I saw one of these schemes, they gave me a glass of water so I did this thing where you close your mouth and pretend to take a sip. My CEO from Pakistan, he saw that and he said, “No, no, you can drink it.” I said, “I’m a foreigner, I’m not used to the water here, I’ll get sick.” He said, “If you can drink Evian, you can drink this.” So I drank it. It was absolutely fine.

And it’s important because I think what we do in developing countries should be as good or better in terms of quality as what we do anywhere in the world. They need quality more than anybody else. 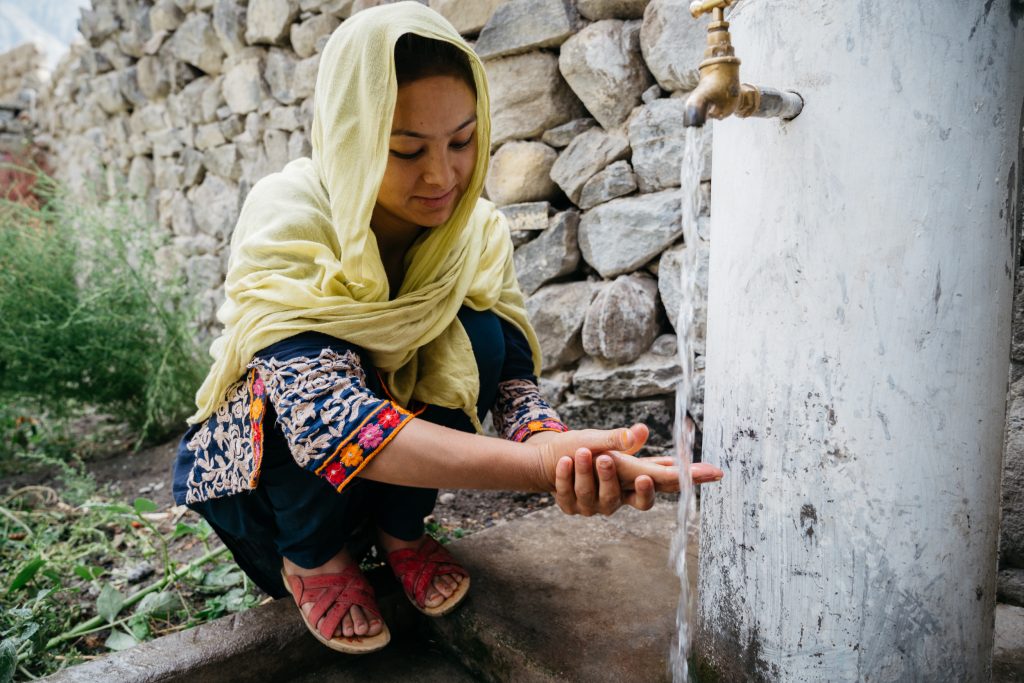 How are some of these issues different for women and girls?

Planning for opportunity means you no longer just think about how the community can survive, but how they can, over time, lift themselves out of poverty. So if you do that, then it’s really important to realize that that’s an intergenerational move.

Now in most societies where we work, the traditional image would be that the sons of the family would follow the footsteps of the father. To keep it simple, if they’re farmers, the sons will likely be farmers. Then you suddenly realize that if even just one of the girls can become a nurse, which is possible in the AKDN, the entire family would have an entirely different future.

So that’s an example of a family. If you multiply that, you don’t just focus on the young, you focus on the female young because that’s where the biggest delta is.

I say that not meaning anything against boys. They can and should make the best of their lives, too. But if you actually focus on empowering the girl child, [development] can go very fast, I believe.

What inspires you to do this work?

I like to tell the story of a village which was hit by a glacial lake flood. There was lots of work on an early warning system, glacier monitoring using drones, all sorts of fancy stuff [to identify the risk].

But in the end, it’s two boys with a flag, sitting on a hill slope looking at a glacier, and two boys on the other side, watching for the flag to warn that the risk materialized and it is time to evacuate the people. That’s community mobilization. By combining community mobilization and science, we can boil it down to the confidence that four boys staying awake all night can save, in this case, 250 people whose houses were flooded.

That I think is the most motivating because I spent my career in development. And the more I traveled and the more I talked to people about development and tried to understand it, the more I realized that the answers do not lie in the contributions of outsiders, they rely on what community itself can do.

This interview was edited for brevity and clarity.