Dispatch from the field: Don’t hit hard, hit home – A lesson in journalism from Kenya

I found Jesca Ciahcabi sitting beneath the shade of a crispy, brown banana tree. I reached for a handshake, but instead she hugged me. We were in Ndiruni, a small village roughly three hours northeast of Nairobi.

She greeted me in her native Gichuka, and ran her fingers through my hair. Her eyes were blue from loss of pigmentation, and her face was lined with what seemed like an impossible number of wrinkles.

I came to Ndiruni to reunite Mama Jesca with her childhood best friend whom she had not seen in more than a decade. Habisag Jaction lived only a few kilometres away, but both women are estimated to be more than 110 years old and do not travel with ease. 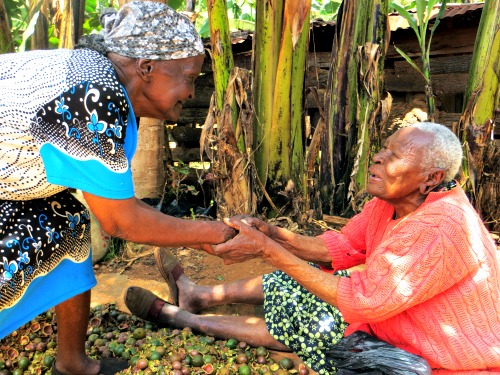 Formal identification was not issued in Kenya at the time that Mama Jesca (left) and Mama Habisag were born, so their ages can only be estimated.

When at last they met, Mama Habisag dropped her bowl of macadamia nuts and Mama Jesca started crying. The friends spent their afternoon swapping news of great-great-grandchildren and reliving memories of hiding from cattle raiders and skipping their chores to get ready for dances.

I listened quietly as the two centenarians got reacquainted and tried to imagine what it would be like to have my best friend for 100 years.

When I started the Fellowship in August 2014, I had a very specific idea of what kind of development stories I wanted to cover in Kenya. I had recently worked as a political journalist in Alberta, and wanted to continue along the trajectory of hard-hitting and breaking news.

But I found no speech, scandal, or statistic in Ndiruni; I found two “golden ladies,” whose tales of war, peace, and colonization stirred my very soul. I had never written a story quite like it, having always avoided “fluff journalism” whenever possible back in Canada. 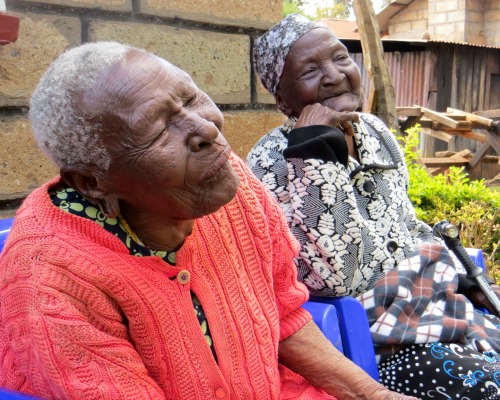 Mama Habisag (left) and Mama Jesca go over a century of fond memories together.

When the feature went to print however, the story proved to be anything but “fluff.” Phone calls started pouring in for the women and their families, offering praise, congratulations and in some cases, requests to meet them.

Bringing Mama Jesca and Mama Habisag together was one of the most rewarding experiences I had ever had, and as a journalist, it gave birth to an incredible realization: Reporting doesn’t have to be hard-hitting to have impact – sometimes, it just has to hit home.

Over the last eight months, I’ve applied the very same lesson to reporting on international development: News doesn’t always mean numbers. Breaking free from the journalistic paradigm of facts, figures and flow charts has been a defining challenge of my Fellowship, but has ultimately made me a better reporter.

I’ve told some of the most meaningful stories of my career to date here in Kenya, and looking back, it’s hard to believe it all started with Mama Jesca, sitting beneath a banana tree in Ndiruni.