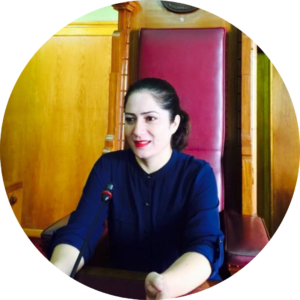 At Aga Khan Foundation (AKF), gender advisors like Zohra Bano are essential to ensuring that gender equality is a core component of programming and organizational culture.

We sat down with Zohra to learn more about her work at AKF, what inspired her to pursue a career in gender equality, and her insights into gender equality and development.

I am the Regional Gender Advisor for the Foundations for Health and Empowerment project – I started in this role in December 2020. My role is to provide technical assistance to countries, including Afghanistan, Tajikistan, Kyrgyzstan, India, and Pakistan, ensuring gender integration across all three components of the F4HE project: 1) Foundation for Children (F4C), 2) Foundation for Health (F4H), and 3) Advancing Gender Equality through Civil Society (AGECS). So, I closely work with country teams, the regional team, and the global team on integrating and ensuring gender equality throughout the project cycle.

I have worked for a few donors, international agencies, and financial institutions. I started my career with the UNDP, moved to a German international corporation, and then moved to UNICEF. I’ve also worked for Oxfam Britain, UN Women, the World Bank, the Asian Development Bank, and the Government of Pakistan.

I’ve mainly worked in Pakistan, but I was engaged in some programming and program management in other countries, including Myanmar, Yemen, Malaysia, India, Bangladesh, and Nepal for multi-country and multi-year programs.

My educational background is in gender and development. I am from Hunza, which is in the northern part of Pakistan, which has been developed by the interventions of the Aga Khan Development Network (AKDN). So, I have been seeing the AKDN as part of my own development processes. And from there, while I was growing up, I had been seeing my father, who had been working thoroughly for community development – for the development of women, men, and youth in my region in Pakistan. So, from that inspiration, I got this idea to be engaged and to contribute as well. I opted to study human rights and then specialized in gender studies.

Gender equality is when women and men, irrespective of their identity, enjoy equal rights – they equally have the right and power to make decisions about their own lives and to lead their lives in the way they want. It is not something that is very specific to acquiring education or economic opportunities, but it is something that is very broad.

For example, a baby has an equal right to come into this world – but in Asia, we have cases of female genital mutilation, female infanticide. So, this is a basic right, where men, women, boys, and girls, of all backgrounds, irrespective of their ethnic, religious, socioeconomic backgrounds, can have access to opportunities and be able to make their own decisions. They can be a part of democratic society as well.

I have been working on projects that focus on auditing gender equality, economic empowerment, health, education, conflict resolution, resilience building, climate change, to name a few. But I really enjoyed an experience I had working for a project funded by the European Union, which focused on minorities and religious harmony in the South Asian region, “I Am One, I Am Many.” It centred around the idea of an individual having multiple identities, that every individual with a different identity has the right to live the way the majority does. This project focused on the rights of religious minorities, women and girls and boys, and other socially excluded groups. This project provided opportunities to the target groups for creating a harmonious system in the region and living a secure life with dignity.

Gender equality is something closely linked to a person’s or individual’s socialization and brought up in a specific context which contributes to building an individual’s perception, attitude, practices, character, personality, vision, or the lens through which one looks at the society and other. To work in this field or be a part of this field, the need is to bring a paradigm shift in thinking which can be achieved through persistent struggle and negotiation.

Thus, my advice would be to understand, realize and bring a change at personal by thinking, rethinking, discussing, unpacking, and unfolding the subject matter – helping in breaking down gender stereotypes, negating biases, and achieving parity between men and women. However, change does not come in a day – gender equality work requires consistent efforts and passion.

Gender discourse is an evolving, and everchanging phenomenon, and it differs from group to group, age to age, context to context, time to time. One of the challenges I foresee is anticipating, seeing, and accepting women’s empowerment at all levels (private and public) with open-mindedness. Another challenge could be welcoming and accepting new people especially young boys with new ideologies around gender equality and women’s empowerment. Engaging with fresh minds (young boys) as compared to men (above 40 years), who may have their own preconceived notions, altering their mindsets, and mindsets could be another challenge. Therefore, engaging with men of all ages is one of the biggest priorities for me to achieve gender equality and women’s empowerment.